The History of Alice Deejay

Back in the year 2000, a Dutch eurodance group called Alice Deejay took dancefloors around the world by storm. But could they be making a comeback? 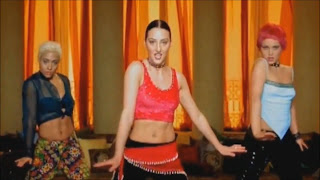 Originally released in 1999, their debut single "Better Off Alone" would be their most famous. It didn't hit the US until 2000, and that is when I first heard it. It was a hi-nrg trance affair that had everyone dancing and belting out the question: "Do you think you're better off alone?" Being on the dancefloor when this song was played was such a magical time. 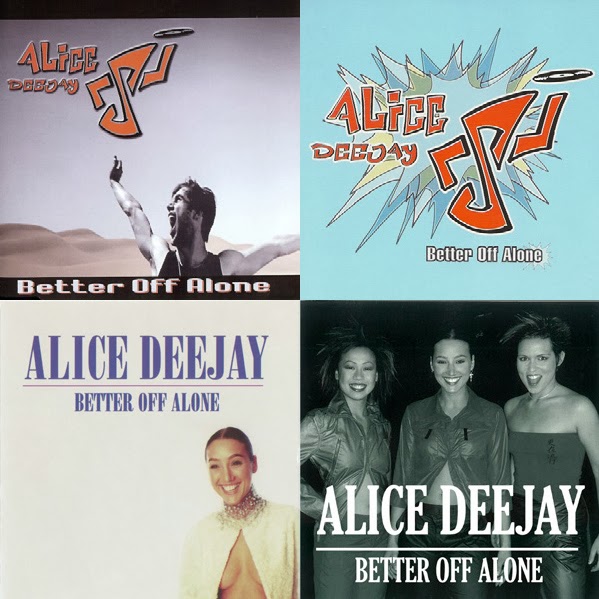 The covers of "Better Off Alone." The one with the three girls (Yutin, Judy and Mila) is one that I made for my own amusement. I always thought Alice Deejay was best presented with the dancers. I did this for all the singles.

But who was Alice Deejay? One woman? A girl group? It was certainly unclear and never truly defined. And the first video for "Better Off Alone" didn't help matters as no one from the group was in it. We later found out that the lead singer missed her flight for the filming. Or so we were told.

But ultimately Alice Deejay was a collection of dance producers fronted by singer Judith Anne Pronk, who we knew as Judy. The dance producers were DJ Jurgen(Jürgen Rijkers), Danski (Dennisvan den Driesschen), Delmundo (Wessel van Diepen), Pronti(Sebastiaan Molijn), and Kalmani (Eelke Kalberg). The album says there are two other vocalists besides Judy: Gaby and Jane. However, Judy always performed with two female dancers. At first it was Mila and Yutin. But for the most part it was Mila and Angelique (Angel). However, there were a couple of performances without Mila, and a woman named Mae filled in, but Mae was never in any videos. 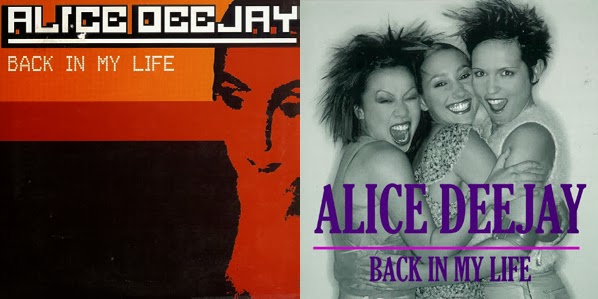 The actual cover for "Back In My Life" and
the cover I made with Yutin, Judy and Mila.

The second single was "Back In My Life." Unlike "Better Off Alone," it had more of the basic song structure with verses and choruses. And lovely talking middle part. The video featured a storyline for Judy while Mila and Yutin came in for the dance sequence at the end. The song went to #1 in Norway, and it was a huge hit across Europe. 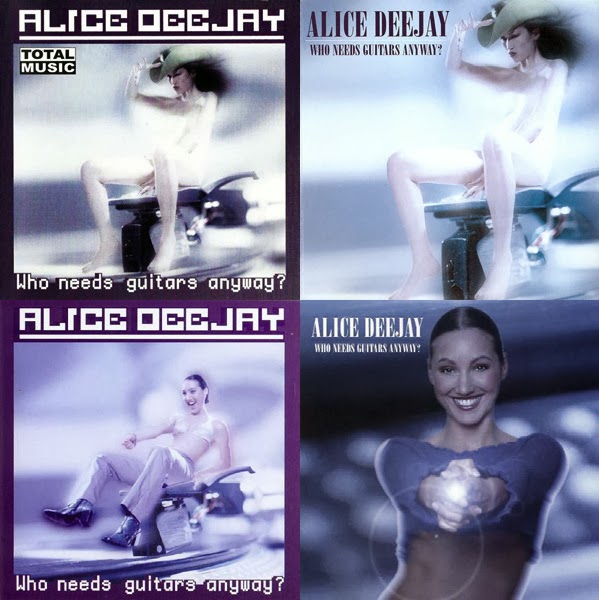 The album Who Needs Guitars Anyway? had a few different covers. At first, the cover featured a nude Asian woman riding on a turntable. Then her picture was replaced with Judy riding the turntable. And then for the USA, we got the solo shot of Judy aiming at the camera.

The debut album Who Needs Guitars Anyway? was an amazing dance-pop album. To this day, I could happily listen to the album with much joy. There is only one song that isn't a dance song: "Fairytales" isn't really a ballad, it is more along the lines that Enigma would do.

With the worldwide success of "Better Off Alone" ... a new video was made with Judy, Mila and Angel.

The actual cover for "Will I Ever" and the
cover I made with Mila, Judy and Angel.

The third single was a slightly remixed version of "Will I Ever." I think over time this has become my favourite Alice Deejay song. It is so uplifting and I love the melody. And the video is amazing with the Greek scene. Judy and dancers Mila and Angel are having a blast!

The actual cover for "The Lonely One" and
the cover I made Angel, Judy and Mila.

The fourth single was "The Lonely One." It was also slightly remixed from the album version. The song is similar to "Better Off Alone" as there aren't many vocals. The video was crazy awesome with the girls filming in Russia. There were even some special effects and the dance sequence was incredible. There was even a lovely making of short of the video.

The actual cover for "Celebrate Our Love" and
the cover I made with Mila, Judy and Angel.

In 2001, we even got a fifth single! How often does that happen? This time, the song "Celebrate Our Love" was re-recorded and reworked. The album version is a club stomper. But the single version played out like a trance ballad at first, then morphs into a mid-tempo number before slowing back down and having a gospel choir come in for grand finale. It was quite different from anything they did before. The video is quite nice, too! 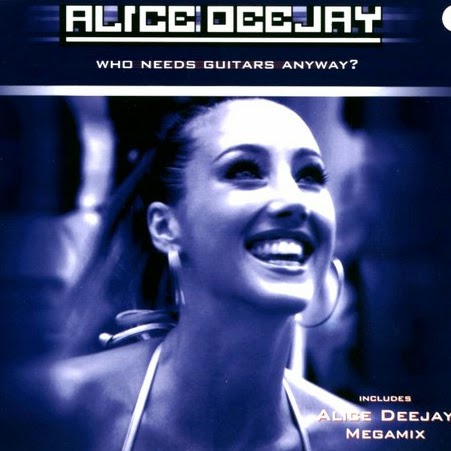 After that, a promo of the instrumental track "Who Needs Guitars Anyway?" was released in Spain, but no video or promotion was done for the track. 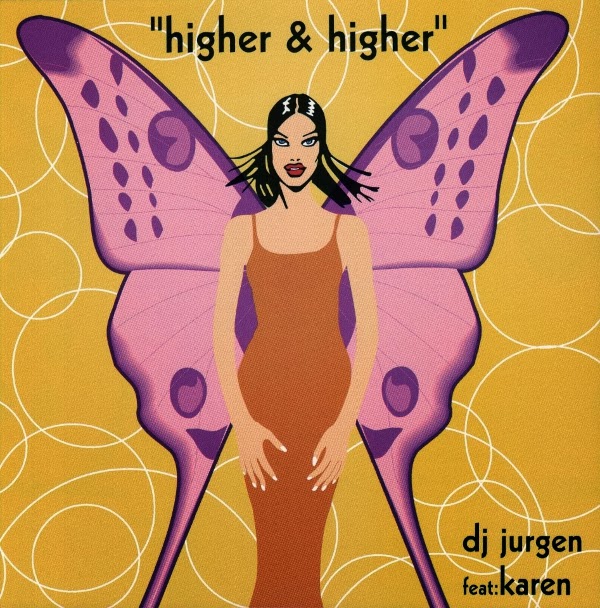 DJ Jurgen had a another hit song with a singer named Karen in 2001 called "Higher and Higher." It sounded just like Alice Deejay and many club goers thought it was indeed the new Alice Deejay song, but it wasn't.

And just like that, Alice Deejay was over. Their last performance came in 2002. There was even a backstage interview with Judy where she said they were working on the second album. They hadn't recorded anything yet, but they were about to. Such a shame that they didn't continue. They had such an amazing debut album with five singles! And in the UK, all five singles were Top 20 hits with three of them being in the Top 10. 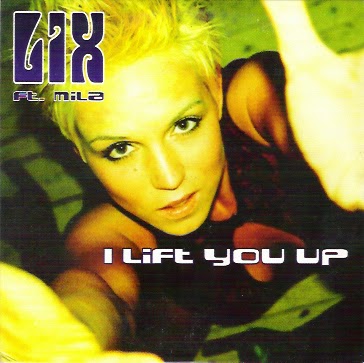 In 2003, dancer Mila released a one-off single with a group called LIX. The song was called "I Lift You Up" and it was right inline with Alice Deejay. I'm not sure if it was a hit or not. Trying to find any information about the song is next to impossible. I finally managed to get the CD single on eBay as it isn't available on iTunes. There were even two video edits! Watch Version 1 and Version 2.

Judy went on to have a successful career in makeup and fashion. She currently has a clothing store called AnnaVie in The Netherlands.

Mila went on to be a successful career in choreography and fitness.

I was unable to track down Angel, Yutin or Mae. 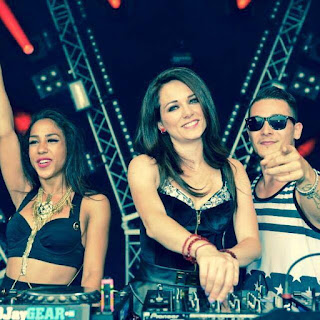 The new lineup of Alice DJ

In 2013, fans noticed a new Twitter account called AliceDJ. Since then, a new group of people have been touring under the name Alice DJ. They've even said over the years that they are making new music. Yet, three years later ... nothing has surfaced. 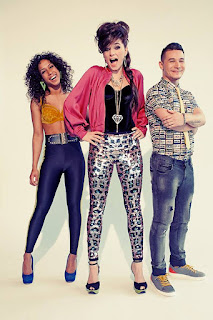 Ilona and the new dancers

The new website says ... Alice Deejay is back in business with a new voice and face, Amsterdam DJ and singer Ilona, managed by the founding fathers of the group, so it's all in the family. Oh, and a slightly abbreviated name… Alice DJ. Available for live-shows based on the original hit singles and dj gigs with a 2014 edm sound. Get Alice DJ back in your life, now! No mention of the two dancer's names.

You can like the new group's Facebook page and see videos of them singing Alice Deejay songs.

I'd love it one day if Judy, Mila and Angel would reunite and give us some of the magic they helped create. Below is one of my favourite performances by the group. It's a megamix! I love how the crowd sings along! Enjoy!~

Posted by Davearama at 6:54 AM