It's been a busy week. And exciting, too! With all of the marriage equality love in the air! Anyhoo ...

Last Saturday, I saw Jody Watley in concert and it was a dream come true seeing her perform live. The show was amazing and Jody was in prime form. And her hair was incredible. Loved it! 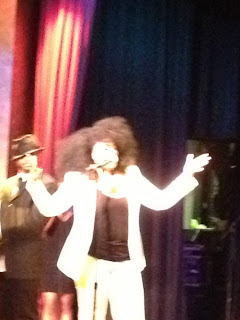 Last month, I wrote a blog entry about Jody's new song "Cold Enough" with French Horn Rebellion. I also wrote a quick history of career. In all honesty, I wish I would written more about just how much her music has meant to me over the years. Perhaps words can't describe it, or I feel it too personal to share here. But her songs have been very important in the soundtrack of my life.

A couple of days before the show, I tweeted Jody Watley telling her that we were coming to the show. To my surprise, she tweeted me back! 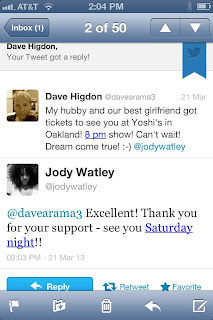 Saturday morning before the show, I got out my 45 singles for "Looking For A New Love", "Don't You Want Me" and "Some Kind Of Lover." I also found my cassette tape of her debut album. I decided I would take them with me. I have more vinyl, tapes and CDs ... but I didn't want to drag everything in. I thought these would be small enough to handle.

My hubby Arturo and our friends Janice and Mourad went out to dinner at the venue. Yoshi's sushi was delicious! And then we went to the show. I really appreciated the three of them coming along. And they enjoyed the show, too. 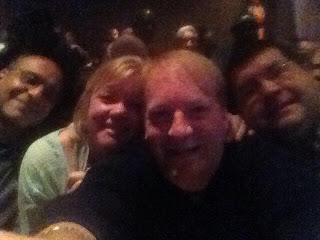 The show opened with a new song called "Nightlife." It is wonderful new track that had me searching on iTunes for it. But it isn't out yet, hopefully soon! And I'll let you know here when it is. In the meantime, you can hear it on YouTube as fabulous dancer named Princess Lockeroo is waacking to it ... 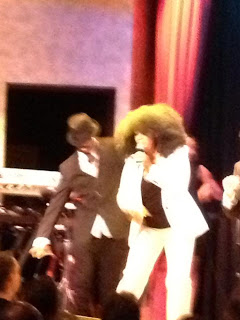 During the show, Jody came out and walked through the audience. She didn't come by where we were sitting, so Arturo and Janice urged me to go to the pathway where she would walk back to the stage. I just grabbed two of my 45s to hold up so she would see I was a fan. Well, Jody saw me and said ...

"I recognize you from Twitter! See I'm not one of those artists who ignore their fans."

I'm not sure if she said anything else right then as my mind was racing. And she was still in the middle of the song when this exchange happened.

Even though I didn't get to officially meet Jody, I left on a high! It was a dream come true seeing her in concert. And it was unbelievable that Jody actually knew my name! And outside the venue, I was recognized as the "Twitter guy!"

I had also tweeted Jody while waiting for the show to start, letting her know it was a full house. She tweeted me back Monday morning ... 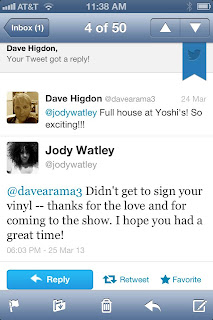 It was a great time, indeed! And now I've been listening to Jody's albums nonstop. I can't wait for her new album this year. You better believe I'll be reviewing it and promoting it here. And who knows, if I'm lucky ... perhaps I'll even get to interview Jody for Poptastic Confessions! Fingers crossed!

And purchase Jody's music on iTunes.

Posted by Davearama at 7:31 AM