Last week, we highlighted the fantastic Parralox remix of "How About No" by Real Experts. This week, Parralox released a sneak preview of a new song called "Last Year At Marienbad." 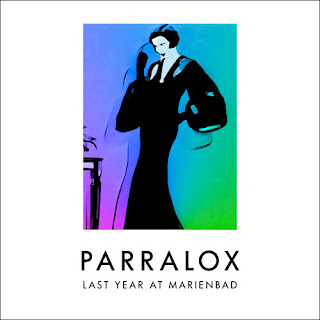 Now, before we get to the song, you might like to know that title and theme of the song are about the 1961 French-Italian film Last Year At Marienbad. While we haven't seen the movie, a quick trip over to Wikipedia gave us the plot, which we edited down for your convenience ...

At a château, a man approaches a woman. He claims they met the year before at Marienbad. The woman insists they have never met. There is a second man, who may be the woman's husband.

The sneak preview of the song was featured in The Notorious New Wave Show hosted by Gina Achord. While the whole show is lovely, you can hear the new Parralox song by skipping to 14:35. However, don't go too far as it doesn't let you rewind. Oh, and follow along with the lyrics here.

How incredible was that? The female vocalist on the track is Louise Love, who also sang on a couple of Parralox tracks on Holiday '15. And in January of this year, we featured Louise's solo song "Get Back." In February of this year, Naomi Arnold wrote a lovely review of a live Louise Love performance!

And of course, the male vocalist on "Last Year At Marienbad" is Parralox mastermind John von Ahlen. Read our interview with him by clicking on his name.

When will "Last Year At Marienbad" be available for purchase? According to the Parralox website, it will be released in November on their forthcoming album titled Subculture.

Posted by Davearama at 1:29 PM