This video came to our attention this week of a three young girls who made a fan video for "Cruel Summer" by Bananarama. We think it is amazing. 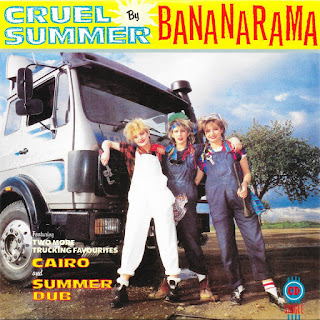 Now, in case you aren't that familiar with the song or video, Bananarama released the song in the UK during the summer of 1983. The USA would get it a year later in 1984 as it appeared in the movie The Karate Kid. Bananarama filmed the video in New York City, and if you haven't seen the video, or need a refresher, then please watch it here ...

So now that brings us to the fan video that captures some of the same spirit as the original. Check it out ...

When the video was posted by Bananarama fan Michelle, I asked her about it.

"I have filmed videos of my daughter Sunny and granddaughter Peyton since they were little. They have their own YouTube channel and their own Instagram," Michelle said.

"The girls loved the song 'Cruel Summer' when I had it on in the car, and they asked me to do it for their next video. Their friend Malia joined in this time with them too. Myself and my older daughter drove them around the area and filmed scenes in the two different parks, and our local supermarket."

"The girls loved it all especially the supermarket scene. I then posted it on twitter and very happy that Sara Dallin commented on it, then on facebook Siobhan Fahey commented."

We love it! Way to go, girls! It deserves to go viral. Please share!

All Men Must Die by RABBII

RABBII are back with an amazing song called "All Men Must Die" and it references to Game Of Thrones. 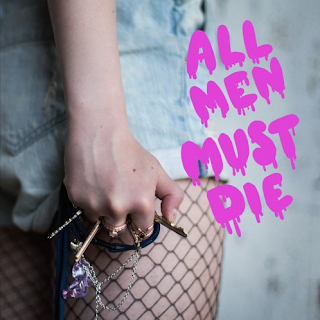 When we first heard the title of the song, we weren't sure what to expect, but we absolutely love this song and we are actually going a bit bonkers over it. During the first verse, a casual listener might mistake this as the new Robyn song.

UPDATE: Check out the AWESOME video that will want to make you eat a hot dog! (By the way, RABBI say: "It's all veggie hot dogs, so no men or animals were harmed during the recording of this video.")


Hopefully you made it to the end of the video to read the disclaimer. If not, here it is ...

Disclaimer:
For anyone who feels like we’re out on a murder spree wanting to kill them, we’re not. Feel better? Good.
We want the social construct of Man to die. The Man that is responsible for almost all rapes, who fight wars, who marches in white supremacist rallies.. you get our point, right? Again, not the actual men, but the idea of that man that our culture has created. Still angry? Well, then we really can’t help you. You should try yoga.

This is one of the songs that we just want to hit repeat as soon as it is over. Well done, RABBII! Oh and apparently RABBII is no longer a duo of Jo and Felix, but there is a new guy named Mats! 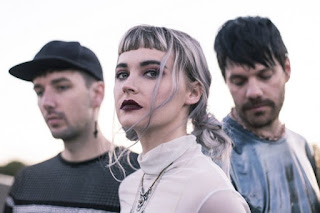 RABBII are Mats, Jo, and Felix
Photo by Izabella England

"All Men Must Die" is available on digital outlets everywhere. Buy your copy today. We've added the song to our 2017 Poptastic Confessions Playlist on Spotify. 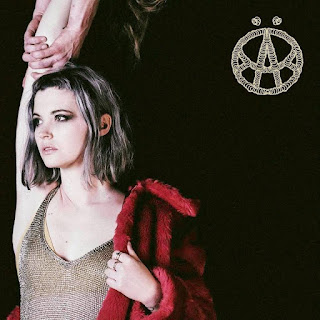 Earlier this year, we featured RABBII's song "Majestic." Last year, their new "New Friends" was #5 on our year-end countdown. And in 2015, "Hang Us High" was #14 on our countdown. Support RABBII my legally downloading their music. All of these songs are also on our Spotify playlists, too!

One More Time by Benjamin Ingrosso

While we still can't get enough of Benjamin Ingress's song "Do You Think About Me", he has gone and released a follow-up single called "One More Time." 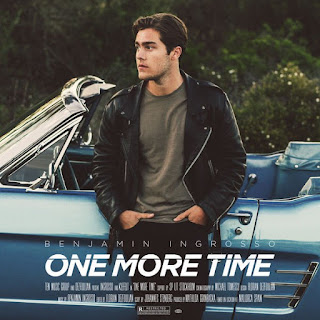 "One More Time" has a summer feel with what sounds like steel drums and a gospel choir joining in throughout. It's a mid-tempo number with a big-budget video that looks like it could be a movie. Have a look ...

Wasn't that nice? "One More Time" is available on digital outlets everywhere. We've also added the song to our 2017 Poptastic Confessions Playlist on Spotify.

Please share and retweet our posts!
Posted by Davearama at 1:23 PM No comments:

Last month, we featured the song "Don't Stop" by Swedish singers Velvet & Therese. We started following both of them on Facebook and Twitter and today we saw that Therese posted that she is the featured singer in a new song called "Shed My Skin" by Eelke Kleijn. 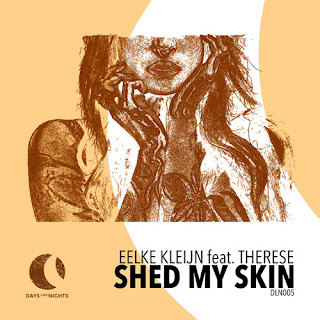 We weren't sure who Eelke Kleijn was so we looked him up and he is a producer from The Netherlands. "Shed My Skin" is a cool, hypnotizing track with a very catchy chorus. The video was done by Street Player (a youth-led creative network Livity, to provide paid training and work experience in media, content production and digital publishing) and features a dancer named Hsiao Lan Magnifique. Check it out ...

We love the track! We've added it to our 2017 Poptastic Confessions Playlist on Spotify! Click here to find other places to buy or stream the track.

Please share and retweet our posts!
Posted by Davearama at 10:54 AM No comments:

The year 2017 may be remembered for some pop comebacks! The latest is from the ever-fabulous Dannii Minogue. If you aren't familiar with her music, check out the blog entry we wrote on the history of her pop career. She's back with a new song called "Holding On." 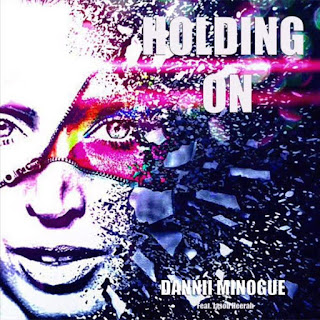 We aren't crazy about the artwork on the single cover (See some options below), but the song is pretty good. The song features a singer named Jason Heerah, who was on the Australian X Factor in 2014 with Dannii as a judge. They performed the new song last year in Australia. Have a look ...

"Holding On" is available on digital outlets everywhere. And we've added the track to our 2017 Poptastic Confessions Playlist on Spotify.


We can't wait to hear more from Dannii! See more cover options below!

P.S.S. Dannii-fan Karl Siniak made some alternate covers that we love ... 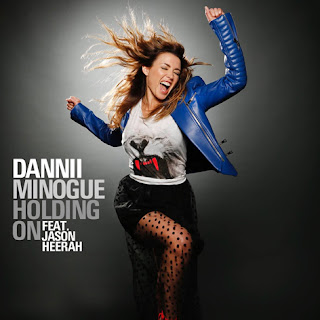 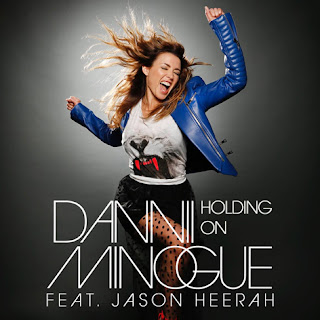 Posted by Davearama at 10:07 AM No comments:

Fantastic news! On Friday, Steps released the third single from their amazing comeback album Tears On The Dancefloor. The new song is "Neon Blue" and it was quite the uplifting number. 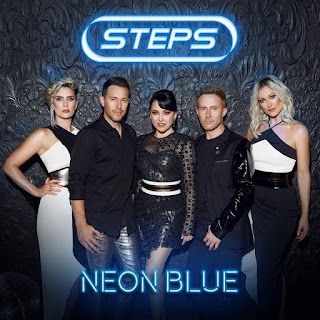 "Neon Blue" is a very happy track! And while the album features lots of solo bits from the guys Lee and H, the singles so far haven't featured them. Well, "Neon Blue" has H and Claire taking turns with the first verse while Faye and Lee take turns on the second verse. Lisa gets the bridge. The video is quite nice. Have a look ...

We love it! We've added the track to our 2017 Poptastic Confessions playlist on Spotify. click the link and have a listen. You'll also hear their previous two singles there: "Scared Of The Dark" and "Story Of A Heart." 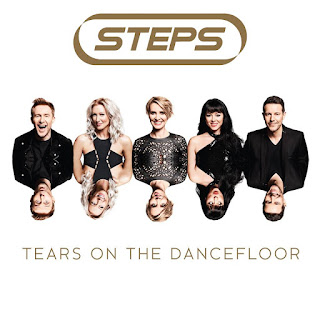 "Neon Blue" and the album Tears On The Dancefloor are available on digital outlets everywhere. Buy your copy today!

The Music Between Us: Concert Ads of Duran Duran by Andrew "Durandy" Golub

At the end of last year, we were in contact with the author of a new book called The Music Between Us: Concert Ads of Duran Duran. The book is by Andrew "Durandy" Golub. We agreed to feature his book in the beginning of 2017, and then we forgot. So sorry, Durandy! Better late than never! And today (August 10) is Duran Duran Appreciation Day! 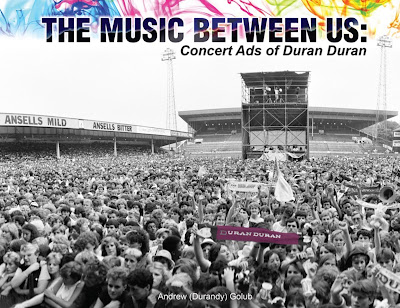 Durandy is a Duran Duran archivist and his new book on the band's concert memories is essential for any Duran Duran fan. Durandy previous published a limited-edition book called Beautiful Colors: The Posters of Duran Duran. 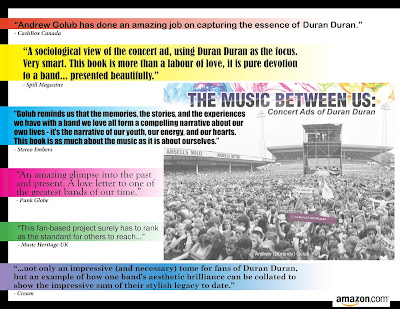 The new book examines the impact Duran Duran made on audiences around the world spanning four decades — seen through the lens of fans' concert memories. It features handbills, flyers, and promotional adverts from around the world, celebrating the Duran Duran live experience, and what it means to be a fan, aka: a Duranie. 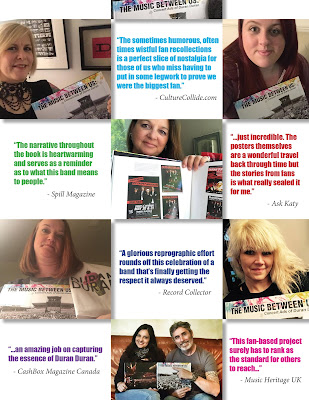 Durandy was kind enough to send me a PDF of the book for review and it is awesome. It has various people's quotes about the shows. It is so endearing to read these. 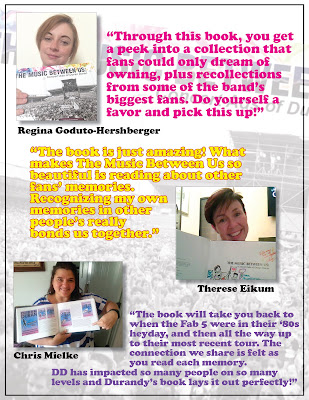 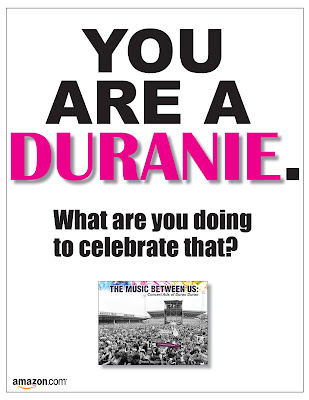 If you are a Duranie, you owe it to yourself to buy this book. You won't be disappointed. And it will bring back many, many happy memories you had the day of the concert. Buy it here.

Human Touch by Betty Who

Betty Who has released her third single from her current album The Valley and the single is called "Human Touch." No, it isn't a remake of Rick Springfield's song by the same name. 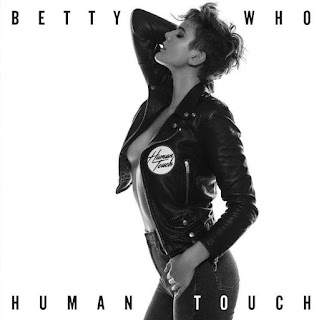 "Human Touch" starts off as slowish song that has a build that only takes it to a mid-tempo bop. The video has Betty dancing with three fellas in a motel in a very hot climate. No, Betty didn't instantly grow long hair, it is a wig! Have a look ...

"Human Touch" as well as her previous two singles "Mama Say" and the glorious "Some Kind Of Wonderful" from her album The Valley are available on digital outlets everywhere. Buy your copies today. You can also find all three songs on our 2017 Poptastic Confessions Playlist on Spotify.


Posted by Davearama at 2:54 PM No comments:

Beautiful Life by The Sound Of Arrows

Last week we came across this amazingly beautiful song by a Swedish duo called The Sound Of Arrows. The song we can't seem to get enough is called "Beautiful Life" and it is EPIC! 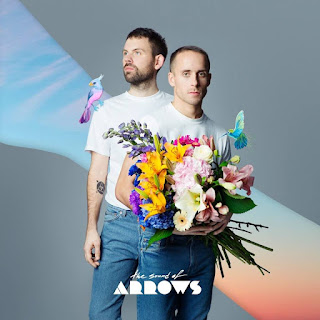 "Beautiful Life" reminds us of some the ballads that PM Dawn had out in the 90s. However, this doesn't song 90s at all. It has a glorious uplifting strings and a wonderful melody. Check out the amazing video ...

Wasn't that lovely? Yes, it was. Admit it, you want to listen again. Go ahead.

"Beautiful Life" is available on digital outlets everywhere. Don't delay, buy your copy today. We have added "Beautiful Life" to our 2017 Poptastic Confessions Playlist on Spotify. Check it out!

Please share and retweet our posts!
Posted by Davearama at 10:59 AM No comments: