Parralox have released their 12th studio album called Genesis. We've been listening to it for a couple of weeks so we could give you a proper review. Like their 2018 album Subculture, Parralox released the album first ahead of a lead single. We asked John von Ahlen from Parralox which song would be the lead single and he replied that he wasn't sure. So we'll let you know what we think at the end of our review. 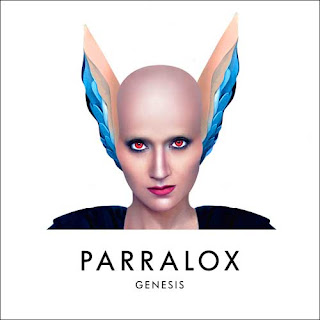 Below is a track-by-track review of the album. We've also color coded the songs to be blue or red. Blue means the song is more pop, and red means the song is more dance pop. The asterisk means these are tracks only available on the CD release. Also, we'll give you links to lyrics on Parralox's official website, where you can find more information about each song. Let's go .... 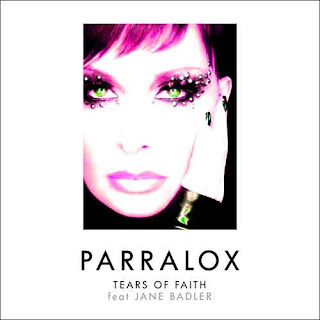 1. "Tears Of Faith" featuring Jane Badler
The intro of this song reminds us of the song "Pure Imagination" by Gene Wilder featured in the classic movie Willie Wonka and the Chocolate Factory. Once the song gets going, it doesn't sound anything like that. We find the song very similar to Parralox's song "Paradise" (our #13 song of 2018). Perhaps because "Paradise" and "Tears Of Faith" were both written by John and Lillia Auzou while they were in their 90s dance group Nova. Lillia has recently passed away, and we send our condolences to her loved ones.

Singer Jane Badler is best known for per portrayal of the character Diana on the 80s TV show V. We also featured her song "I Own The Sky" last year in Poptastic Confessions. Jane gives a very nice vocal delivery on "Tears Of Faith." It has an amazing chorus that sticks in your head. Very well done. See the lyrics page here. Have a listen ... 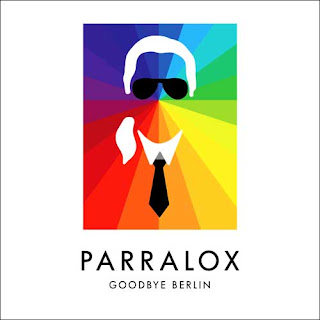 2. "Goodbye Berlin"
This mid-tempo number is sung by Johanna Gervin, who also provided the lead vocals on their hit "Electric Nights" (our #1 song of 2017). It has a great melancholy melody. If this reminds of any Parralox song, we would have to choose "Aeronaut" (our #9 song of 2015). Well, maybe it isn't similar at all. Perhaps you should just check it out if you missed it. See the lyrics page here. Hear the song here ... 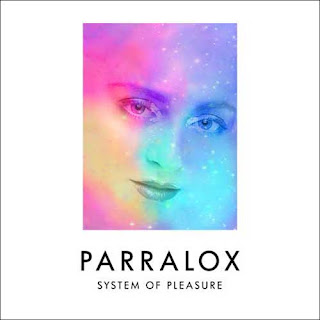 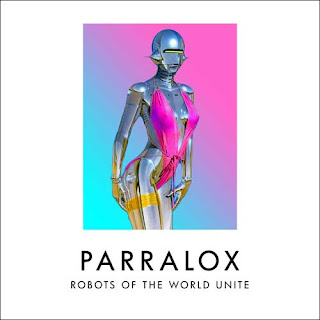 4. "Robots Of The World Unite"
Until we had to write the title out, we've been referring to this song by the title "Robot Lover." This is the first track that picks up the beat and we would categorize it as dance pop. The magic really kicks in the bridge/pre-chrous leading to the fun chorus. We love this song and it is one our favourites. Still surprised it isn't called "Robot Lover." No matter, it is fantastic! See the lyrics page here. 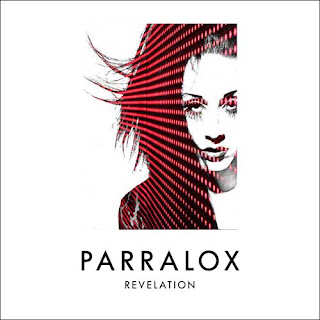 5. "Revelation"
This keeps up the momentum with another fun dance-pop song with an amazing bassline. The vocals are shared between Johanna and John with Louise Love on backing vocals. This is another strangely titled song as "Love Me Now" is really what the chorus is about. We absolutely love it. See the lyrics page here. 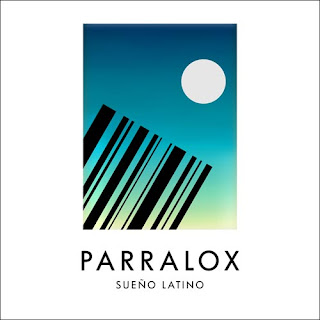 6. "Sueño Latino"*
This brings the pace back down a bit. Yes, it is sung in Spanish by John, although Louise wrote the verses in Spanish. Loosely translated, it is "Latin Dream." It is great song and now Parralox fans in Spanish-speaking territories will love this gem. But hold that thought. More Spanish is coming. See the lyrics page here. 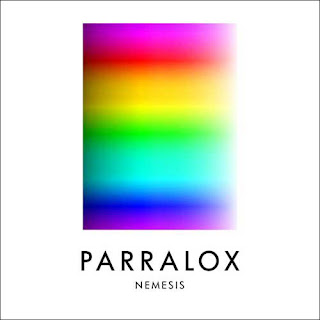 7. "Nemesis"
The beat picks up for this song, which if you aren't paying close attention, it largely feels like an instrumental for the first part of the song until John's vocals come in for the chorus. However, if you are listening closely then you hear the verses are sung in a vocoder ... or by a computer, so it isn't an instrumental at all. See the lyrics page here. Listen here ... 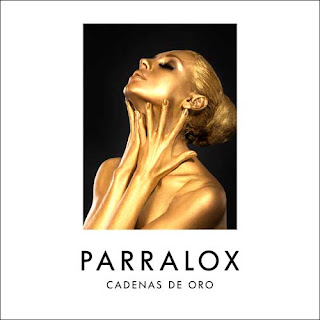 8. "Cadenas de Oro" featuring Ian Burden
Who is Ian Burden? Well, he used to be in the Human League, but he left in the 80s. He has been featured on a few Parralox songs in the past. He is playing bass on this song. The vocals are provided by Louise, and yes, they are also sung in Spanish. It translates to "Gold Chains." It is quite nice. See the lyrics page here. 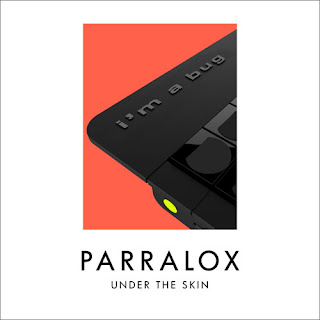 9. "Under The Skin"
This is a really fun song filled with wacky nonsensical lyrics. Louise has the coolest vocals. She really owns this one. So good. Again, "Under The Skin" isn't mentioned in the song lyrics, but no matter. We love it. John told us, “The song title came first. Then I looked up the movie [Under The Skin] script and wanted to get inspiration. I remember reading it and thinking it was very different to the movie and got confused. Then I realized it was a parody script. But the opening lines gave me inspiration and it turned into a stream of consciousness thing.” See the lyrics page here. 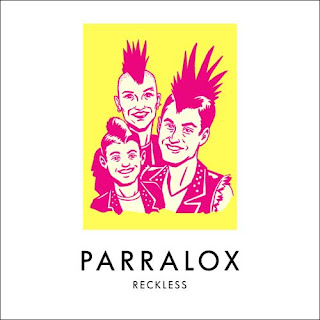 10. "Reckless"
Oooh! Aaah! (Just a little bit.) This one was co-written with Gina G! Remember her? It figures that is has that gallop beat that many of her songs had. This is a fun dance track. It features Louise on lead vocals with John on backing vocals. It is piano-house pop! See the lyrics page here. 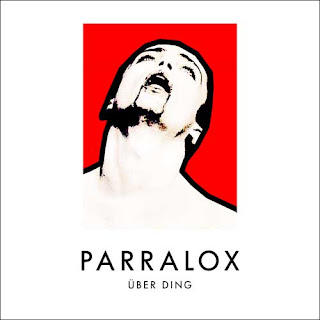 11. "Über Ding"*
This is sung in German! How fun. John takes the lead. Louise in the backing vocals. It is fun song to dance around to. We are sure Parralox's German fans will be happy to hear this one. See the lyrics page here. 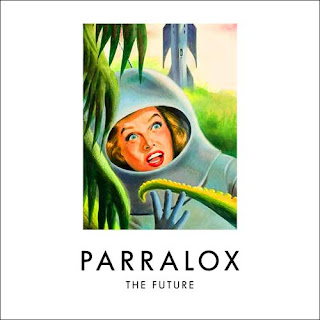 12. "The Future"
This mid-tempo song has a lovely melody. Perhaps it take a bit of a darker turn, as John takes the lead on this one. The chorus is quite good with Louise joining in and doing a call and return. There are some really nice vocal parts toward the end, so no skipping allowed! See the lyrics page here. 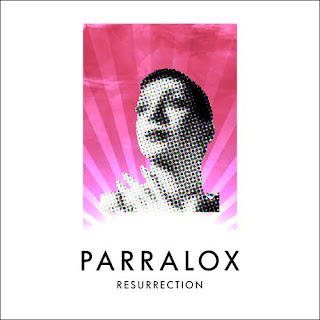 13. "Resurrection"
Two words: AMAZING. You can almost hear John channeling Giorgio Moroder on this relentless dance song. We are getting serious Donna Summer "I Feel Love" vibes here. Louise takes the lead, and again, she makes everything she sings sound so very cool. This is definitely one of our favourites. See the lyrics page here. Listen here ... 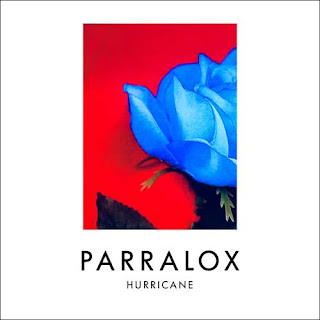 14. "Hurricane"
This is a lovely song with John on lead and Louise on backing vocals. The melody is just ace. It just has all the right elements for a great pop song. Very good. See the lyrics page here. 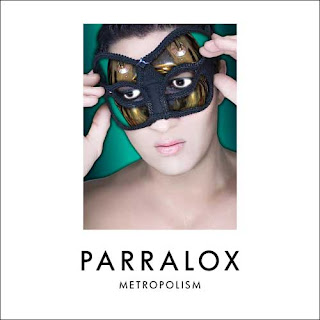 15. "New Light" (Rotersand vs Timo van Laak Rework Edit)
The original version of the song "New Light" is from the group's 2011 album Metropolis. The album version is a space age ballad sung by John. This remix takes it straight to the dance floor. Apparently this remix first appeared on the group's 2011 remix album Metropolism. We never got that remix album (D'oh! Bad fans!), so this version is brand new to us, and we are LOVING it! See the lyrics page here.

There you have it. Genesis is wonderful pop album filled gorgeous melodies, magical moments, and dance beats galore. Hear the album preview here ...

Or better yet, stream it on Spotify here (but remember that 2 of the songs aren't on streaming services) ...

Which singles would we choose? Well, for the pop side of things ...

For the dance pop songs, we would choose ...

1. Resurrection
2. Revelation
3. Robots Of The World Unite
4. Under The Skin

Genesis is available on digital outlets everywhere. Buy your copy today. Head over to Conzoom Records to buy the actual CD, which will be released at the end of the month. 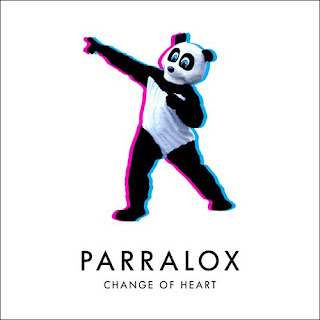 Don't forget that Parralox released their last single (from the Subculture album) in August called "Change Of Heart."

Posted by Davearama at 8:12 AM